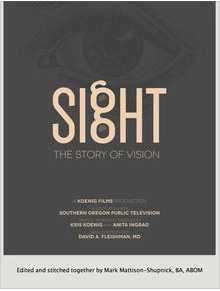 Sight: The Story of Vision, is a documentary on scientific, medical, technological, and human aspects of vision that premiered in October 2016 and is now available online at PBS.org. The film, narrated by Sir Elton John, tells the story of how people discovered how eyes work as well as how to improve or restore sight. It also features stories of people who have experienced vision loss.

The movie is accessible to people with red-green color confusion, thanks to efforts by writer and director Kris Koenig, who applied color correction to the film so people with red-green color confusion could distinguish those colors better while watching. Koenig decided to apply the color correction after he tried a pair of EnChroma eyeglasses which are custom-tinted to help people with various types of colorblindness. You can watch the trailer at StoryofSight.com.

The one-hour film inspired creation of a downloadable eBook, two apps, and a website. The eBook is available for download from the iBooks store and the documentary website. It was created by Mark Mattison-Shupnick, ABOM. Mattison-Shupnick, a master optician, wanted to provide a “deeper dive” into the many topics covered in the documentary. The eBook was underwritten by a grant form contact lens manufacturer CooperVision, and eyeglass lens manufacturer Essilor supported its development. You can download the app Sight: Story of Vision Second Screen App from the documentary website or from Apple’s App Store. It provides terminology related to the documentary as well as additional video content.