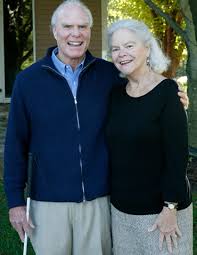 “The Illumination” is a new film telling the story of Gordon and Lulie Gund’s 46-year-long mission to turn their own experience with blindness into research to restore vision to others. The documentary was produced by the Nantucket Project, and it premiered at the Cleveland International Film Festival in March and was an official selection at the San Francisco, Nantucket, and Greenwich film festivals.

The Gunds’ story is told by now-17-year-old Yannick Duwe from Belgium, one of the first people whose blindness was reversed during a gene-therapy trial that was conducted at Children’s Hospital of Philadelphia. Duwe entered the trial in 2008 when he was 8, becoming the first child in the world to participate in a gene therapy clinical trial for a nonlethal disease. The procedure that reversed his blindness will soon be reviewed by the U.S. Food and Drug Administration, and if approved will be the first-ever approved gene therapy for an inherited retinal disease.

Gordon and Lulie Gund are the co-founders of the Foundation Fighting Blindness, and they created a field of research by recruiting scientists and funding experimental studies. After many setbacks, FFB researchers made a breakthrough in 2006 and were cleared to conduct clinical trials. Gordon is an American businessman, sports team owner, skier, and sculptor. He lost his sight to retinitis pigmentosa at the age of 30.

Said director Tom Scott in a recent FFB newsletter article: “In making the film, we wanted to show what it might feel like to be blind and yet live in the light—to be able to ski, sculpt, appreciate sports, run businesses, love deeply, feel true happiness, and most importantly, imagine a world without blindness. Gordon may have lost his sight, but he gained the gift of vision, and that is now his gift to the world.”

The film will be released for public viewing this Fall. To see the trailer, visit www.theillumination.org.