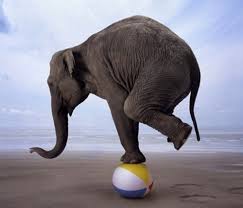 You may be aware that vision loss contributes to falls because it makes it more difficult to see what is in your path, but did you know it can affect balance in general? Science just began to unlock this mystery in recent years: Read on to learn more.

UC Davis Health System researchers released information in 2013 on a large scale population study that linked poor vision with diminished vestibular balance. In the first study of its kind, they performed measures of physical balance across individuals with normal vision, uncorrected refractive error, and the visually impaired (published in the June 6, 2013 issue of JAMA Ophthalmology). The study suggested that vision may play an important role in calibrating the vestibular system, which includes the bones and soft tissue of the inner ear. The vestibular system helps optimize physical balance.

We actually organize and integrate information from the visual, proprioceptive (information perceived through our muscles and joints to tell us where we are in space) and vestibular (inner ears sensing motion, equilibrium, and spatial awareness) systems to maintain the body’s position at rest or in motion. The systems enable individuals to maintain a steady focus on objects even when body position changes and to safely maneuver in the environment.

Jeffrey R. Willis, an ophthalmology resident at UC Davis Health System Eye Center and lead author of the 2013 study, worked with the Dana Center for Preventative Ophthalmology at Johns Hopkins University and senior author Pradeep Ramulu to conduct a cross-sectional study, evaluating data from 4,590 adults aged 40 or older, who participated in the 2001-2004 National Health and Nutrition Examination Survey (NHANES). The national survey, which aimed to assess balance in a nationally representative population, included tests of participants’ ability to stand with feet together unassisted under increasing challenging conditions:  standing on a firm surface with eyes open and then closed, and standing on a compliant, foam surface with eyes opened and then closed.

Foam-surface testing with eyes opened measured the effects of the visual and vestibular systems to work together to maintain postural balance, while the same test with eyes closed primarily assessed the impact of the vestibular system alone, as visual and proprioceptive inputs were minimized. Balance was graded as pass or fail, with the time-to-balance failure recorded for each of the tests. Participants failed the test when they began to fall, moved their arms or feet for stability, or needed help to maintain balance for 15 seconds while on the firm surface or for 30 seconds while on the foam surface. The researchers also gathered data on each participant’s self-reported difficulty with falling during the last year.

The researchers found that participants with visual impairment and those with uncorrected refractive error had significantly higher rates of failing the eyes-closed foam-surface balance test (a proxy for vestibular balance) compared to participants with normal vision. Subjects with visual impairment also were more likely than those with normal vision to self-report falling difficulties.

While age and other health conditions can also influence balance, it can be important to address the role a vision disorder plays in falls. If you are concerned about your balance and risk for falls, Ensight’s occupational therapists can access and help you optimize vision-related balance issues. In addition, participating in our Matter of Balance classes can help you learn to prevent falls.