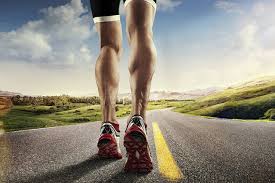 Simon Wheatcroft is an ultramarathon runner. Though he has retinitis pigmentosa and has been blind since 17, he has slowly built his mileage and his ability to traverse varied terrain. The story of his evolution to distance runner is one of daring as well as ingenuity.

When Wheatcroft grew bored running from goal post to goal post on the field, he ventured out onto a closed road. Next he ran on an open road where he could feel painted lines and inclines under his feet. He could stay on route, and yet he hit traffic signs, ending up battered and bruised until he memorized the placement of obstacles. He increased his daily mileage to ten miles, then trained for marathons and even ultramarathons. He ran half of a 100-mile course in the Cotswalds, United Kingdom, then from Boston to New York, which is 221 miles.

While he sometimes ran with sighted guides, Wheatcroft has relied heavily on technology, starting with the Runkeeper app on his phone. He used the app to learn how far and fast he’d run as well as for guidance on where to turn. He worked out a system to tag obstacles like trees or lamp posts so he would receive cues and be able to avoid smacking into them.

Believing that an app designed for blind runners could do even more, he began working with IBM to build an app called eAscot. While the GPS on phones has an accuracy of 10 to 20 meters, IBM was able to reduce this accuracy distance down to 5 meters on the new app. Wheatcroft also encouraged the company to create beeps instead of spoken audio cues which he found interfered with his ability to tune into ambient sound.

Simon tested the app in a Sahara ultra marathon, a 250-km desert run in Namibia. The app mapped out the course into a series of straight lines, and then alerted Wheatcroft to deviations from the line sets with beeps. Other cues told him when to change direction. During the ultra marathon he ran into a flagpole and fell, then came a rock field that damaged his feet and forced him to stop. But Wheatcroft continues to run, and he continues to work with IBM to fine tune the app.

The next frontier for both Wheatcroft and IBM is to create a way for blind runners to use motion sensor technology to avoid moving objects, and Wheatcroft hopes to be able to use it to run city marathons solo. Watch a video about Wheatcroft’s story here, or read more about his story here.