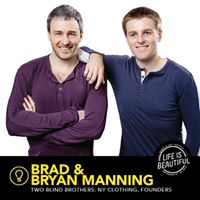 Bradford and Bryan Manning were diagnosed with Stargardt’s disease in childhood.  The disorder caused gradual loss of their central vision, and it also gave them a mission:  To raise awareness and help others with eye diseases.

They decided to develop a clothing company and donate the earnings to support research to end blindness.  Now called Two Blind Brothers, their company donates 100 percent of proceeds to charitable foundations, programs, and researchers focused on their mission. The Mannings live in New York City, and their clothes are produced in Dallas by factor workers on the blindness spectrum.

Because the brothers rely on their sense of touch, they were inspired to create clothes that feel great.  After carefully researching fabric sources, they began to use various blends of bamboo, cotton, and spandex to make a line of casual shirts that are soft and comfortable.  They also incorporate braille within their shirt designs.

On their website, Bradford and Bryan note that a cure for blindness is within reach and they cite articles like this one from CNN titled “’Miracle’ cells could cure blindness” on stem cell research.  In 2017, customers helped them fund 30,678 hours of clinical studies with the Foundation Fighting Blindness.  The brothers say they are just two of the more than 10 million people in the US who could benefit from previous scientific advances and the promising stem-cell-transplant research, gene therapy treatment, and clinical trials underway today.

Check out their website to see their styles and read more in large print.